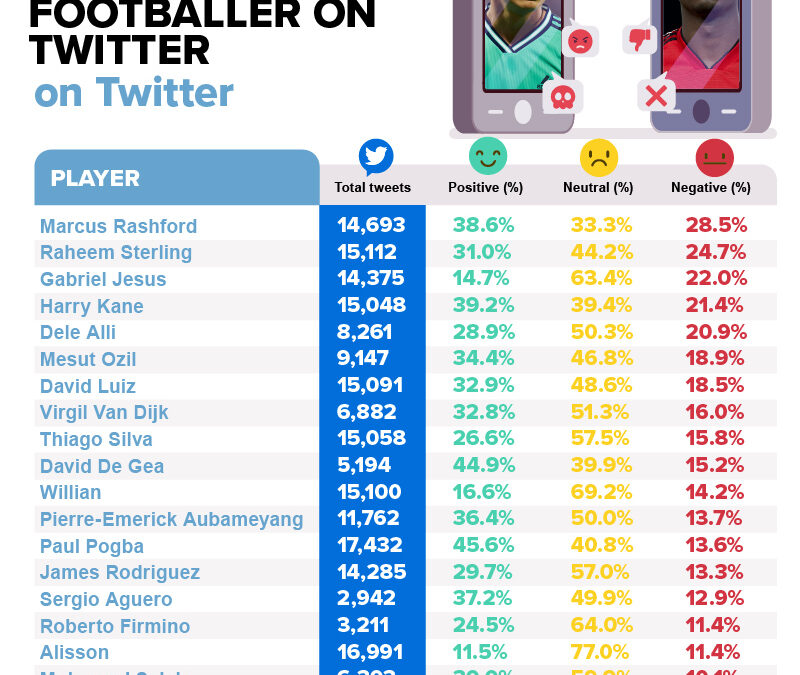 REVEALED: The Most Trolled Premier League Footballer on Twitter

This year has been a peculiar one for sport. The uncertainty regarding future of in-house support for football is still up in the air. Inevitably, with little to no outlet for fans to celebrate their love and support, Twitter has become the primary catalyst for people to share their opinions on some of the top footballers.

This led to compare.bet utilising SEMRush to uncover which of the highest paid Premier League players is the most trolled on Twitter? And, who is the most talked about? SEMRush collated data from 06 Aug 2020 – 15 Sep 2020, to reveal which footballer has the worst Twitter presence.

SEMrush began by looking into who has received the most negativity on Twitter.

The answer, and perhaps the most shocking, is Marcus Rashford. It is no secret that Rashford has been very munificent in giving money to charity and helping out the community, and yet, on Twitter, Rashford has been receiving the most negativity, with 28.5% of his Twitter mentions being negative in nature.

Coming in second place for the negative tweets is Raheem Sterling with 24.7% tweets of anger.

Also, a notable mention from the list is Dele Ali, receiving 20.9% negative comments. This may sound strange to many, however, judging by Twitter consensus, fans are disappointed and frustrated by his ‘lack of progress’, after displaying so much great potential and skill early on in his career.

Which footballer has the most positive reception on Twitter?

Paul Pogba has the highest general positive sentiment, with 45.6% of Tweets praising him. This may be surprising to a lot of people as Pogba is often labelled as a ‘lazy’ individual. On the contrary, many fans’ opinions infer that he is a ‘world-class’ player and that he has a lot of positive traits which outweigh the supposed ‘laziness’ and ‘arrogance’.

As well as being the most positively thought of on social media, Pogba has been Tweeted about the most out of all the footballers analysed with over 17,432 Tweets mentioning his name from 06 Aug 2020 – 15 Sep 2020.

Coming in at second place for the positive reception on Twitter is David De Gea, with 44.9% of Tweets being positive in nature. Harry Kane, with 39.2% pragmatic tweets, comes in at third place.

With regards to online interest, at the moment, Sergio Aguero is receiving the least amount of attention online, with only 2,942 people Tweeting about him. This is likely due to his knee injury back in June 2020. Although, with him due to return soon, there is no doubt the spotlight will be on him again to score those all-important goals for Manchester City in the title race.

It may come as a surprise, but generally, many have an impartiality of needing to voice their opinion on Roberto Firmino, only getting mentioned 3,211 times.  As such a prominent player for Liverpool, it is interesting to see how many people are on the fence about him on Twitter. It is possible that fans do not consider him as noteworthy as his Liverpool teammates Mohamed Salah (6,303 mentions) and Sadio Mane (14,776 mentions).

Compare.bet teamed up with online analytics tool SEMrush to collect Twitter sentiment analysis data on 20 footballers and the number of tweets mentioning then, between the dates of 06/08/2020 and 15/09/2020.  Compare.bet then did some digging on Twitter to see what people’s general opinions were and seeing how/if this differed from the data that was collected.

If you choose to use the images provided, please credit appropriately.

We really hope you find this release useful. If you do end up using it, we would very much appreciate a link to compare.bet who commissioned the data. A link credit allows us to keep supplying you with future content that you may find useful.’